Warm and dry weather has settled over south central Alaska promising the return of mosquitoes and tourists.  Late last week I killed the first mosquito of the season; it was one of the big, slow and noisy ‘over-winter’ variety but its appearance heralds the first batch of this season’s blood suckers which will be small, quiet and very hungry.  I’ve refilled the propane tank and will most likely setup the ‘Mosquito Magnet’ once the snow disappears.  For the time being it is providing me the fuel to grill on the front porch.  The kidz are reveling in getting out for daily walks with me; previously the roads were too icy and snow covered to safely walk.  I love being able to do at least half my daily 12k+ steps outside in the sunshine and fresh air!  Without question, we are into the winter to spring changeover.

Break up is my least favorite season up here as is true for many Alaskans mainly because water and the associated mud seems to be everywhere!  In this area our mud is composed mainly of gray/brown glacial silt which is extremely fine grained; it clings to the coats of my canine companions until it dries – normally, inside the house – and falls off.  I can tell their favorite resting areas by the accumulation of the floury, gray silt; while it cleans up easily there seems no end to the stuff during this season.  Not all that long ago this area was buried beneath glaciers which slowly retreated towards the Alaska Range to the north and the Talkeetna Mountains to the east grinding up rock as they moved; this explains the abundance of the material.  This glacial flour is also responsible for the clouds of dust lifted by vehicles driving on the unpaved roads; if it is windless this dust can hang in the air for minutes confirming its fine nature.  This also explains why auto manufacturers consider this to be an ‘extreme’ area in terms of vehicle wear and tear; coupled with the snow and cold the dust makes it really hard on mechanical objects.

As the spring intensifies so does the solar radiation; this, in turn, begins to heat the interior of the house with time.  Already it is unusual to awaken to an air temp in the master bedroom below 62.0° F (16.7° C); just a month back I would often arise to a brisk 58.0° F (14.4° C) or cooler.  The slow rise of the internal ambient air temperature is something I encourage in early spring but by late spring I’m already using fans to draw in the cooler early morning air, despite the high humidity, such that the afternoon temps on the second floor aren’t getting too warm.  Almost all my screens are back in place and I’ve even put up some light blocking shields in the master bedroom windows as it is remaining light until 22:45 and we will not see ‘Astronomical Twilight’ again until August 10th.  I would like to learn to sleep with the sun streaming in the windows but to this point I’ve not yet been able to make this happen.  Maybe with the passage of a few more summers..?

This will be the first year I’ll be added routines involving my 2017 R-pod travel trailer; I hauled it back here in September of 2017.  The winterization process was very straightforward and fairly simple; I expect the efforts required to get it ready for use this spring through fall will be equally easy.  With a bit of luck I’ll be able to load up the trailer, pack the kidz in the back seat of the Escape and do some camping in the Kenai Peninsula late April to early May.  With luck this should allow me to avoid the first of the real tourist crush but there’s still a lot of snow in portions of the Kenai so I’ll have to wait and see.  If I cannot get down into that area this spring I will do so come fall.  After all, I didn’t go through the epic journey of hauling the unit from central Montana to Talkeetna just to let it sit!

The moose which were almost ubiquitous just a few weeks back have largely disappeared.  I suspect this is a combination of a much decreased snow pack and the cows heading into the forest to birth spring calves.  This winter was hard on the local moose population as I’ve seen more reports of moose carcasses since February than during any other similar time frame since relocating up here.  There are the remains of a bull just about a half mile east of my place; a neighbor told me of the carcass last week.  It is common to share such knowledge amongst the locals as such situations can and do draw bears as they come out of hibernation.  Learning of the bull’s remains will cause me to alter my early morning walks with the kidz for the next few months; we’ll be walking primarily to the west.  Once the local scavengers have had time to degrade the remains it will again be fine to walk that area with the dogs.

And so the seasonal cycle is once again on display in ‘The Great Land’.  As with all things in life there are positive and negative aspects to this dance but in the long run I still enjoy the season’s shift and am looking forward to leaves again populating the branches of the birch trees and warm summer breezes.  Of course, there will always be the mosquitoes and tourists but that’s all part of life in magnificent south central Alaska…

A look to the north on Riven showing mainly bare earth with the ubiquitous puddles. 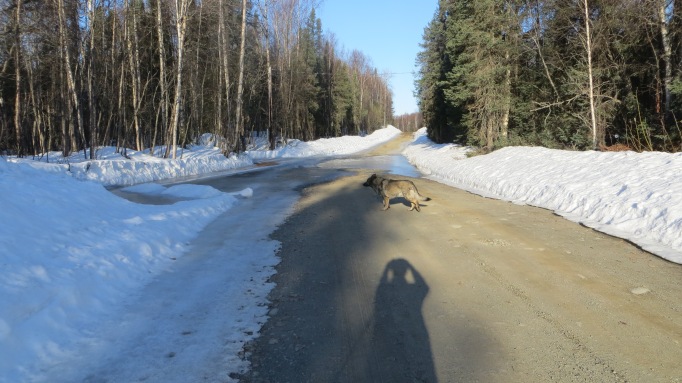 Qanuk contemplates a section of East Barge Drive inundated by snow melt; he is less sure on ice than Anana (my Alaskan malamute)