Given my fascination with all things weather it should come as no surprise that I love to collect and analyze meteorological data as well as weather related imagery.  I already knew Alaska was rich in both these areas and my first two plus months living up here has not disappointed!  Its been a very strange weather year for most of ‘The Last Frontier’ and this strangeness is continuing; to be more specific its been well above normal in terms of temperature and especially rainfall.  In addition the very make up of our daylight has been shifting dramatically.  Its sure getting dark early (around 19:00 AKDT) and not getting light until almost 08:40 AKDT; we’re still losing 5 minutes and 28 seconds of light per day (i.e. 38 minutes and 30 seconds per week!) which is a phenomenal amount.  I’m not pleased we’re stuck in this warm cycle; the NWS climatological records show we should be below freezing by every morning now and rarely climbing much above the middle to upper thirties during the day.  Heck, this morning we didn’t even drop to 41 F and I haven’t seen a temp below freezing since October 10th.  In fact out of the sixteen days in October on only five mornings has the air temp fallen below freezing and the coldest I’ve recorded was just 24.9 F.  I’m ready for some genuine Talkeetna late fall weather but thus far its not to be seen!  The rain sure hasn’t let up much; I’ve recorded 5.14″ of rain in October, not including what’s fallen since 07:00 AKDT this morning, with 12 out of 16 days this month showing measurable rainfall.  Given the average October rainfall is 2.90″ we’re already 177% of normal for the entire month!  Definitely strange weather and not at all what I expected especially in terms of precipitation.  Some of the locals tell me that by this time in a normal year the lakes and rivers have frozen up and folks are ice skating!!  And, of course, its continuing to rain today although we’re currently seeing a small break in actual precipitation.

Boreal forest need a lot of precipitation to survive and this immediate area is making sure said woods have more than enough!  While taking the dogs outside a bit earlier I snapped these images of my back yard: 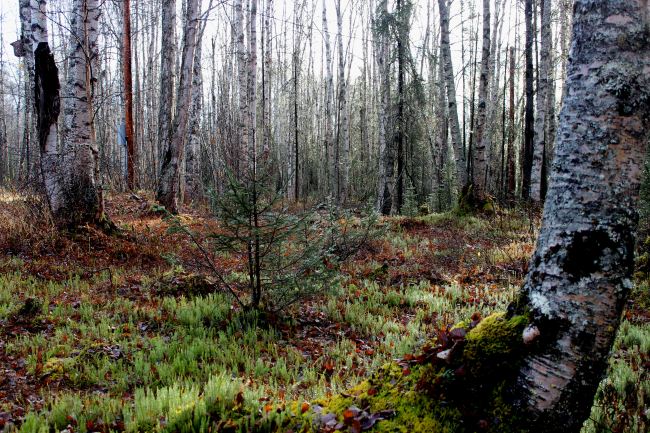 If you look closely at the branches and limbs you’ll see a myriad of water droplets clinging to almost any close to horizontal exposed surface.  Its just that wet.  Even the normally just damp dirt roads are awash in puddles; getting the dogs out in such conditions sees them return looking as though they’ve been sprayed down with a hose.  Although they lust after the exercise they are not pleased to discover such circumstances guarantee a stay in the mud room until they dry off and remove some of the dirt.  Yesterday was the first time we walked in a steady down pour and even with good rain gear about all I could handle was a bit more than an hour.

We’re long overdue for snow and while I love the snow and cold – if I didn’t I’d have picked the wrong place to retire to – I’m really looking forward to it now because its so much easier to walk in it and not get saturated in the process.  From my researches Talkeetna normally sees snow around the start of October and generally has snow cover by this point in the month.  Given its 43.7 F at 12:13 AKDT today we’d have to cool off a lot to see the white stuff.  While I know it will eventually make it I must admit to being impatient.  With this said I cannot help but remember the old saw; ‘be careful what you wish for..!’.  I’ve never experienced an Alaskan winter; the closest I came was the week I spent up here last April (7th through the 13th) house hunting.  During that time it was regularly in the teens during the day and dropped well below zero at night; in addition we saw snow which added a few more inches atop the existing 30 plus inches of existing snow pack.  This winter is going to be a real learning experience but then I expected this and must admit I’m ready to see just how well I fare; regardless it will be a true adventure for this lower 48er learning life in rural Alaska!