In what I hope is a harbinger of a cold, snowy winter in semi-rural south central Alaska we saw our first snowfall from Thursday afternoon (October 20th) into early Friday morning.  Although I observed just 1.75″ of uncharacteristically heavy, wet snow other areas to the south and east saw anywhere from 3″ to 9″ in the Hatcher Pass area.  The SWE of the snow measured 1″ of liquid water producing 7.29″ of snow; we normally see 1″ of liquid water yielding between 12″ and 30″ of snow.  However, this is not surprising given the temperature stayed a degree or two above freezing across Thursday into very early Friday morning and we saw sleet and freezing rain mixing with the snow late Thursday afternoon.  The snow remains on the trees and ground as of Saturday morning but we are also seeing moderate (13-18 mph) north breezes so before long the trees will lose their snowy covering.

Here are a couple of images taken from my second floor Friday morning: 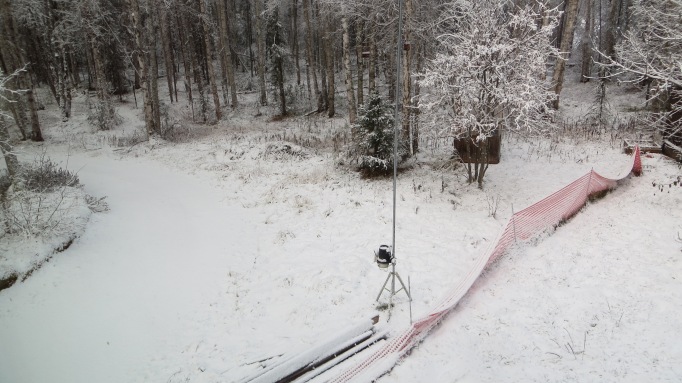 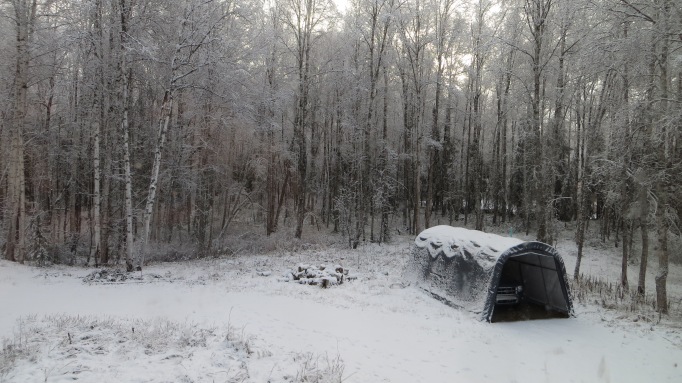 It’s official; I’ve given up on the 2014-2015 ‘winter’ in south central Alaska!  Although it is just March 2nd and in a normal winter up here we’d be seeing snow and cold for at minimum another six weeks I’m betting we’ll see few snow events and those we see will be minimal (i.e. less than 6” total) in nature.  I’m sure we’ll see cold temps just as we have across the past four days but then we are already seeing regular high temps that break freezing if the sun is out even if we started with a single digit morning low temp.  Of course this reflects the lengthening days and with them the more direct sunlight but in a typical March we’d still be seeing snow and cold and that would easily extend into April.

This morning I measured the SWE (snow water equivalent) along with the snow depth for my Monday morning CoCoRaHS (Community Collaborative Rain, Hail and Snow network) report; the snow depth is a piddling 12.5” and it really isn’t snow but more like saturated snow or ice.  The SWE is 3.09” which equates to one inch of water equaling 4.045” of snow.  Anyone at all familiar with snow knows that in general an inch of liquid water will produce between 7 and 10 inches of snow; therefore this ‘snow’ is indeed saturated!  Looking back over February we broke the freezing mark 17 out of 28 days; keep in mind February is the third coldest month after December and January!  That basically means 61% of the days in the third coldest month in south central Alaska saw above freezing high temps.  Many comments come to mind but perhaps the most PC is:  “That’s just wrong!”

Most frustrating to me is the simple realization that this winter will go down in the records as one of the two warmest on the books; and the competition is last year’s ‘winter’!  So for the first two winters I’ve lived in Alaska there have been two record-breaking warm and dry ‘winters’.  Lest you need reminding I moved up here to experience feet of snow and bone chilling cold; the former hasn’t happened while we’ve seen maybe five days each ‘winter’ when the temps dropped below -20 F.  I swore if I see three such ‘winters’ in a row I was going to leave here and move north of Fairbanks; sadly this would only partly improve on the conditions as even the northern Interior has seen record warmth across the past two ‘winters’.

Meanwhile the place I left – SE Michigan – saw record snow last winter and has seen well above normal snow along with very cold temps across both winters.  Prior to leaving I was just fed up with SE Michigan’s winters which were largely brown with 36 F temps and rain.  In fact the winter of 2012-2013 saw a record absence of both snow and cold.  I recall thinking I didn’t care what the weather did in Michigan after I departed because I was guaranteed of seeing all the cold and snow I could handle in my new home.  So much for that belief…!!

So here I sit typing this whining blog entry while looking outside, seeing bright sunshine and an air temp of 26.4 F at 12:13 AKST.  If the sunshine remains we’ll easily cross 32 F by 17:15 which is the current warmest part of the day.  It is amazing that just six weeks back it was totally dark by 17:15; the light cycle is really exaggerated in the higher latitudes.  And I am looking forward to being able to get some much-needed outside work handled once a bit more of the icy snow-pack disappears.  I gave up a lot in terms of favored weather to relocate up here; I love severe thunderstorms and tornadic weather but neither of these occur at any time up here.  I also gave up the hardwood colors of fall when moving here; while the yellows and golds of the birch and larches are pretty I do miss the reds, oranges and violets or the maples, oaks and elms.  And I really do not care for the summer and its continual light!  I never realized how much of a night sky watcher I am until I completed my first full Alaskan summer in 2014; by the start of July I was very tired of constant light with no night sky.  The real issue is such conditions will not return until middle August.  At least the summers up here are much cooler than those in SE Michigan although because I live in the middle of the boreal forest the humidity is almost as bad.

By penning this I’ve demonstrated I’m no Alaskan yet as real Alaskans just shrug off unusual weather and get on with business.  I just have a hard time when I realize now I will not be seeing the possibility for a true Alaskan winter until November of 2015!  However, beyond the weather there’s a myriad to love about my home and I really need to focus on all that and just let go of the lack of real winter weather to this point.  A few of the locals have warned me to be careful what I wish for; while I hear them I would love to see four feet of snow-pack and weeks of air temps rising to just single digits while dropping into the negative teens or even lower!  Hopefully one day I will get the opportunity before I’m too old to really appreciate such conditions.  But given what I’ve seen to date such conditions are at best very unlikely this ‘winter’.  And so I’ve plunged my imaginary fork into the ‘winter’ of 2014-2015 as it is ‘done’! 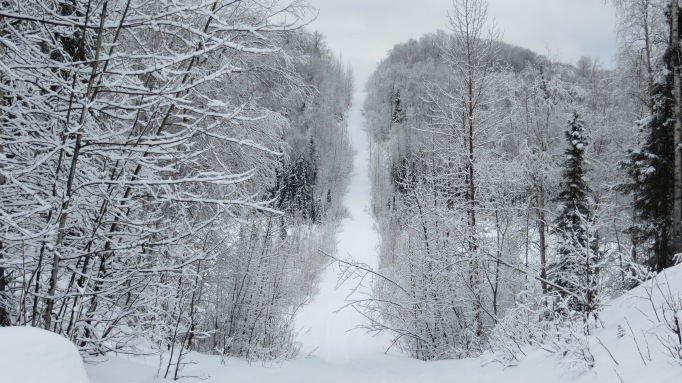 What I should be seeing when I walk to the intersection of East Barge Drive and Riven. Sadly the unmaintained portion of EBD has bits of the gravel road surface visible through the disappearing snow and ice even though it’s just now March.