One of the less pleasant truths about living in Alaska is the cost of living; many items and services are incrementally more costly than their counterparts in the lower 48.  As far as material things this is not a surprise as most everything needs to come to the ‘The Last Frontier’ via either air or water and hence has additional shipping costs.  As to services; Alaska ranks 47th amongst the 50 states for total population and dead last in terms of population density.  Therefore, there’s a much smaller pool of people to draw upon for any given livelihood so the average ‘quality’ of any worker is likely to be a bit lower than one might find in the lower 48 although this is definitely not a given.

It’s always bothered me that Alaska is the source of so much petroleum yet it has some of the highest gasoline prices of the 50 states.  I can see places like Hawaii having extremely expensive gasoline and other petroleum by-products as they are islands with no native source of petroleum so everything must be shipped in.  But this is not the case in Alaska.  The only refinery I’ve seen operating in Alaska is in the NW corner of the Kenai Peninsula – in Kenai – although according to 2014 figures there are a total of six operational refineries.  Regardless, there should be enough refining capacity to supply the needs of Alaska based upon its low population.  But you wouldn’t know this to be the case looking at our gasoline prices which only in the past week finally dropped below $3/gallon.  I’ve heard from friends in the lower 48 of gasoline prices around $2/gallon and even a few below that number.  I also find it curious that fuel oil appears to be much closer to the country’s average ($3.17/gallon versus $3.66/gallon).

Regardless I was pleasantly surprised when returning from picking up donated food stuffs in Palmer I saw the following; and, yes, of course I filled up! 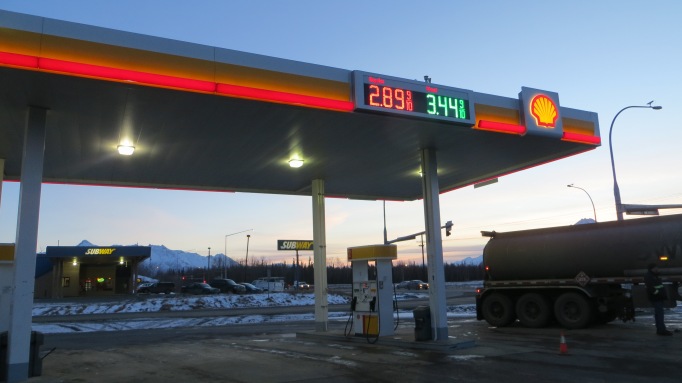