The end of the winter of 2017-2018 has been full of surprises in terms of snowfall and as the spring begins to take hold yet another surprise has bloomed.  After seeing few moose during the fall and winter across the past two weeks this area is suddenly awash in the magnificent mammals!  Never have I seen so many moose in such a short period of time and their sudden appearance has made for some ‘interesting’ times.

One of the things I love about Alaska, in general, and this area in particular is the abundance of large mammals.  By far and away moose are the most common large mammals although we do see the infrequent grizzly, black bear, fox and wolverine.  Moose are common enough that I have developed some habits related to their presence such as ‘jiggling’ the front door knob before opening the door when it is dark outside to give forewarning to the large critters that we are coming out.  Even so, I’ve spooked a few moose whom were close to the front porch and decided to freeze rather than move off.  The kidz are fascinated by the moose and have largely learned to steer clear of these huge ungulates but will watch them intently.  Anana, my Alaskan malamute companion, has even tried very hard to encourage some moose to play.  Bless her heart, at times she’s given almost every canine body language signal for play but remains befuddled when the moose do not respond.  Sadly, she just doesn’t ‘cog’ to the fact moose have different body language…

Because of their presence I’ve been able to collect a lot of images of these superbly adapted mammals on the local roads and on my property.  I can only guess the reason for their sudden appearance is based upon the voluminous snow events of latter February into early March which had given this area a 60” (152.4 cm) snow pack.  With the ‘moose of March’ came a string of sunny days with high temps above freezing although overnight lows dropped into the low teens to single digits.  This dramatically decreased the snow pack and, in so doing, saturated the remaining snow.  With the cool overnight temps the snow will freeze and becoming difficult to walk through although not frozen solid enough to support the weight of a moose.  Because of the difficulty in navigating these conditions the moose, being the opportunists they are, have taken to the nicely plowed back roads to travel.  This, of course, makes them a lot more visible to we humans.

I’ve amassed a number of images from my recent encounters with these amazing animals; the following are but a few of said images:

I photographed the almost ‘friendly’ moose on East Birch Creek Road while returning from a post office run. 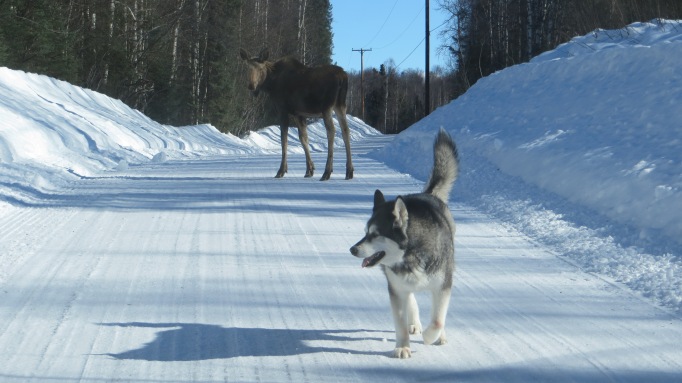 My Alaskan malamute companion (Anana) was a bit too close to this moose just outside my driveway; it let her know it was time to ‘back off!’

I saw this moose from the SE bedroom on the second floor while doing my morning stepping. It napped in this spot for over three hours.