Indeed, it was two years ago yesterday that my buddy Sarge and I pulled out of the driveway at the rental dive I’d called ‘home’ for two years and started a 4200 mile plus drive to Talkeetna, Alaska.  This marked the culmination of a sixteen year old dream and was one of the most amazing experiences of my – at that time – 59 years.  I’d been prepping for this trip from the time we visited Talkeetna in April of 2013 to locate and purchase a house; even with all this time there were still some harrowing events.  I ended up with a U-Haul van which was too small for my household and we sacrificed a day swapping it for a 26 footer.  Then the local ‘Two Men & A Truck’ outfit sent a team of guys to my place charged only with packing my household but not loading it.  I was not pleased and contacted the office; after much grief I managed to get them to confirm they would send out a new team the next day to actually pack the van.  However, when the team arrived they’d been told they were just to pack my household and only had three hours before another job.  I went ballistic, reamed the outfit and forced them to supply me a team to load the van the next day which was a Saturday but I refused to pay the premium for their efforts.  They managed to do a really crappy job and Sarge and I had to repack maybe a third of the van.  By Saturday evening I was exhausted and angry but looking forward to getting stated.

We left early Sunday (07/29) morning and started the adventure.  I drove my Escape with some stuff, my two canine companions (Anana and Qanuk) and my female Seal Point Siamese (Circe).  After weeks of checking routes, reviewing lodging and services and similar we elected to drive north through Michigan and cross into Canada at Sault Ste. Marie; while this ultimately worked out we did lose two hours getting through Canadian customs.  We drove for almost 12 hours but made it to Marathon, Ontario on the eastern edge of Lake Superior.  From this point onward we averaged around 445 miles/day and needed nine and a half days to finally reach Talkeetna in the early afternoon of day 10.  To be honest the days on the Alaska Highway rarely totaled more than 300 miles driving due to road conditions, the U-Haul van’s issues with the Rocky Mountains and traffic.  If memory serves I believe we averaged maybe 650 miles a day (11 hours driving time) while in Manitoba, Saskatchewan and portions of Alberta but this really dropped off in British Columbia and The Yukon Territories.  The toughest sections were the Alaskan Highway over the Rockies and the last 100 miles of the same road before we crossed into Alaska.

A heartbreaking event occurred during a stop over in Fort St. John, British Columbia which I still feel today.  We found a motel, unloaded the four legged companions and were relaxing for the evening.  Somehow during trips out the door my Siamese managed to slip out.  The next morning I couldn’t find her in the room and was just heartbroken.  As it was 06:30 I couldn’t walk the halls calling her name out loud but I did walk all the hallways looking for her.  I checked with the front desk but no one had seen her.  After spending 90 minutes searching I could do no more mainly because we were on a tight time schedule.  I left the front desk with my cell number, Alaskan address, former vet’s phone number and a picture and sadly started driving.  I never heard a word and to this day I don’t know what happened to her.  I know she hated riding in the car and I’m sure after five days she was fed up and decided to slip out.  As she was a beautiful feline with a wonderful personality I can only hope someone found her and gave her a warm, comfortable home.  I miss her to this day and just writing this is difficult for me!

I’ve included a few images from this trip of a lifetime.  I’d love to do it again but without time constraints and with a trailer or  similar for the dogs.  Maybe I will make this happen…

Crossing the Mackinaw Bridge into the Upper Peninsula of Michigan 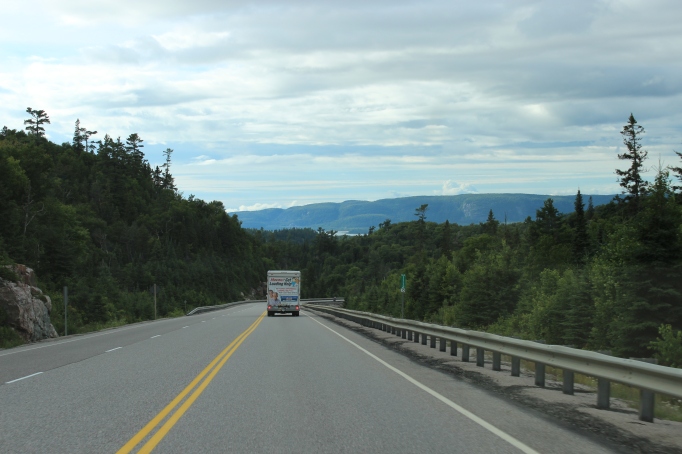 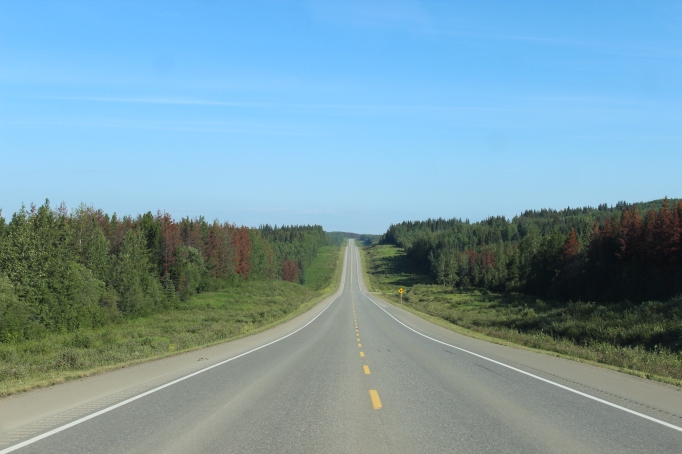 Gorgeous views in the Canadian Rockies 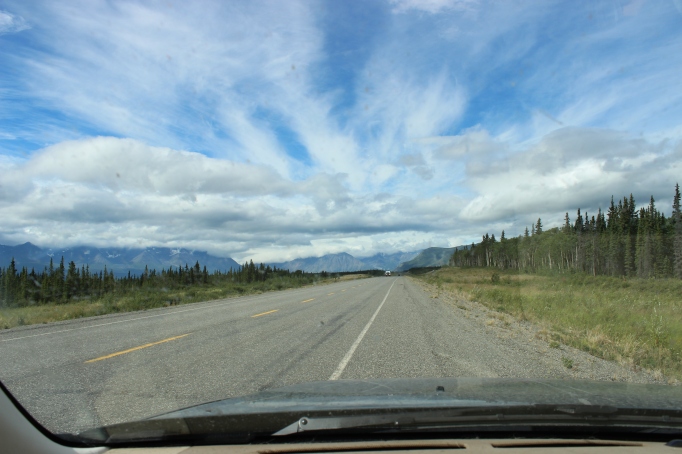 Anana looking out the Escape’s window in The Yukon Territories, Canada

Heading into Destruction Bay in The Yukon Territories, Canada

The Alaska Highway turns ugly in The Yukon Territories, Canada! 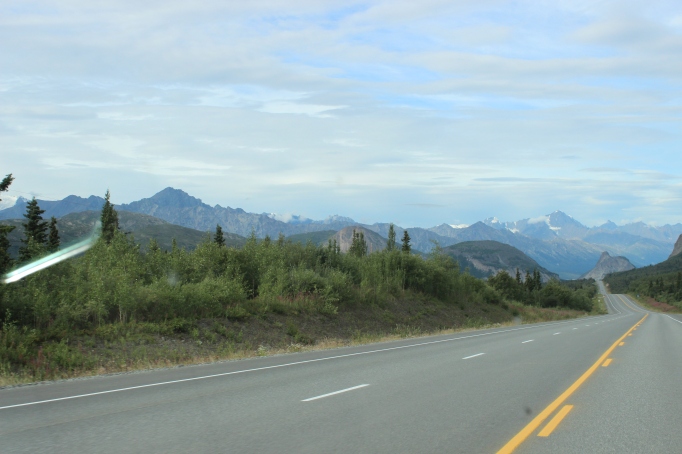 Inevitable delays on the Alaskan Highway!

My much beloved Circe; I so miss her..!!