I’m truly struggling with ambivalence regarding writing this piece for reasons which will soon become clear; I just do not want to appear elitist or condescending but by the same token I, along with many of my neighbors and fellow ‘Talkeetna-ites’, are not pleased of late.  Perhaps most irritating to me is the wonderfully immense Alaskan silence is now being broken on a routine basis by the sounds of human beings…in this case the tourists!  The final straw in breaking my ambivalence regarding writing on this subject came just 18 minutes earlier when the peaceful silence of the pre-08:00 Saturday morning was shattered by a distant siren.  It occurred to me that I have only heard sirens three times since I moved up here almost ten months back; the previous two times were late last summer and then once in late November for a local dwelling fire.  But this has not been the only assault upon my precious Alaskan silence; across the last three weeks there has been a gradually increasing influx of vehicular traffic into Talkeetna.  The road now regularly sees lines of RVs, campers, travel trailers and those lousy, noisy motorcycles!  It’s hard to even drive in town because there are people walking everywhere; last night I had to wait the passage of a throng of tourists just to make the left turn from the Spur onto Second Street to get to KTNA for my newscast.  The bad thing is the locals tell me ‘tourist season’ normally doesn’t begin until this (Memorial Day) weekend; in addition they’ve told me this is far more people than is normal for May visits.  I’m wondering just what it will be like come July..?

With all this said I must confess that I am only too well aware that from 1996 through 2005 I was one of these tourists.  And, yes, I did ride a motorcycle in the lower 48 although mine was a vintage BMW K 75 and was very quiet.  In addition when I visited Alaska I was always respectful of the rules and signage and especially of private property.  Sadly I’ve already heard reports of RVs ripping down ‘No Overnight Parking’ signs and setting up.  A small unopened camping area south of town had its barrier illegally removed and now there’s a myriad of RVs and trailers occupying the site; when the owners do finally return they are in for a surprise!  I will no longer walk the dogs even close to the Spur because its gone from seeing one vehicle every hour or so to seeing tens of vehicles every few minutes.  In short so much of what I loved about this area in terms of the silence, the slow pace and the lack of human density have all disappeared in the dust clouds behind trailers and RVs and the crowds of people milling about the town.

My sense of fairness will not allow me to just rag against the tourists; I know this is Talkeetna’s life blood and without the tourist dollars each year this magical little town wouldn’t be half of what it is but I already long for the quiet and slow pace that exists from middle September through early May.  But this is also my first experience with living in a location that draws a large tourist crowd and thus far I’m finding little I like about this facet of Talkeetna life!  Its been a while since I really struggled with the duality of ambivalence but I’m now getting a chance to once again experience the instability of these feelings as I try to find common ground.  To be honest I can largely ignore the influx by remaining in this immediate area and trying to stay away from the town; there’s no reason for any tourists to be on East Barge Drive unless they’re lost.  But I cannot escape the noise that they bring with them and this is unsettling.  In addition my routine runs into Palmer and Anchorage on behalf of the Pantry are now greatly complicated by the plethora of trailers, campers, RVs and rubber- necking tourists now crowding the Parks Highway.  It’s easy to develop a definite dislike for these intruders until I remember that I was one of ‘those’ folks just a few years back.  And so once again the ambivalence manifests its unsettling presence in my existence.

In the grand scheme this influx of ‘the great unwashed masses’ lasts only three months and a couple of weeks (mid-May though August); after that time life will return to the ‘norm’ that I so enjoy.  All these people pump significant dollars into the Alaskan economy in general and into Talkeetna in particular so their presence has to at the very least be tolerated.  I am now coming to really understand that observation I heard not long after I moved up here; that Alaskans would have open season on tourists were it not for their dollars.  I’m sure most tourists would view this as a bit of rural Alaskan humor but the truth is it’s an accurate appraisal.  However, I’m just going to have to learn to be more ‘Alaskan’ in this regard and just deal with the issues brought about by tourism.  Come September it will be interesting to see whether the tourists have displaced the mosquitoes with respect to being the biggest pain in the ass during Alaskan summers.  Right now the jury is out and given what I’ve seen to date I sure wouldn’t be willing to make a call! 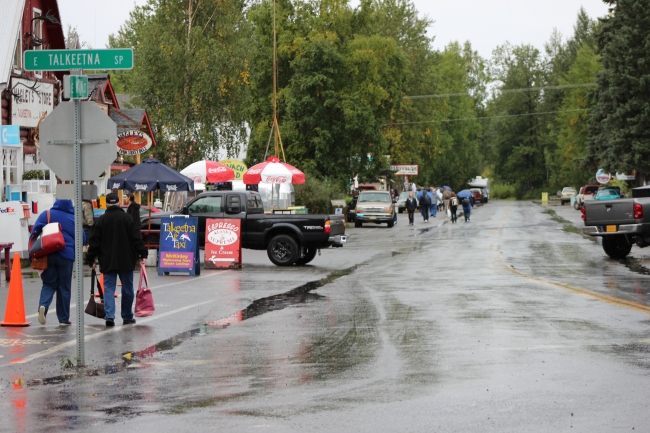 This image of ‘downtown’ Talkeetna was taken last September when the number of tourists had already decreased and we actually had precipitation!