As we rapidly approach the calendar start of winter – the Winter Solstice occurring on December 21st this year at 14:03 AKST while the meteorological start to the season was December 1st – I once again find myself contemplating the boreal forest and the sky above its mix of birch and spruce trees.  I spend far too much time parked in front of a monitor but I do have a large window just three feet to my left which looks out from the second floor office into the immediate surroundings.  We still remain far short of snow with just 7.5 inches of snow pack and the temperatures have been see-sawing back and forth around the freezing point which is exceptionally warm.  All told this looks to be my second consecutive ‘winter that wasn’t’; while not happy with the prospect I am working to become more sanguine with this concept…maybe next year?

Yet there’s still a lot to marvel at in my new Alaskan home and one of those observations is the extremely low angle to the sunlight this time of year.  While out walking ‘the kidz’ yesterday early afternoon I was reflecting upon just how much the partly cloudy sky resembled an early sunrise or sunset; the underside of many of the Altocumulus stratiformis clouds of the mid-altitude cloud deck were orange and red while the few Cirrus intortus at a higher elevation were brilliant white tinged with fiery yellow against the azure sky.  I had to remind myself this was just 13:25 AKST and thus only a bit more than half way through our current 5 hour, 3 minute and 47 second direct sunlight period; according to my tables the solar ‘noon’ occurred at 12:56 AKST.  Although there were still many clouds on the western horizon when I could see it – the boreal forest really surrounds this area – the sun was indeed very low. Just how low is ‘low’?  Using NOAA’s Solar Position Calculator (http://www.esrl.noaa.gov/gmd/grad/solcalc/azel.html) I calculated just 5.4 degrees above the horizon at 12:59 AKST.

This is extremely low; for comparison using Detroit (MI) on this same date and the same time (12:59 EST) I came up with an angle of 23.94 degrees.  No wonder this former Midwest boy thinks the sun is darn low up here!  Of course I was aware of this phenomenon as its fairly straightforward physics represented using geometry but to actually be standing on a shadowed, snow-covered back road surrounded by the immense and silent boreal forest while marveling the sun can hardly be seen even between the breaks in the trees really brings the concept home.  I know from previous experience that on the summer solstice a few hours later the sun will reach almost 52 degrees above the horizon; what a difference!

I’d heard many folks – mainly photographers – talk about ‘flat light’ and they often bemoaned its influence at the higher latitudes.  Only after I relocated up here did I come to understand just what flat light is and how it can negatively affect photographs.  The sunlight striking the higher latitudes in their winter season is forced to travel through a lot more atmosphere to reach the surface of the earth because of the curvature of the earth’s surface.  This helps create the lack of shadowing and an overall ‘softness’ to the resultant light which produces a dearth of real detail.  Thus many images taken under such circumstances lack a myriad of subtle visual clues the human eye uses to establish depth of field and hence a degree of three dimensionality to the picture.  I saw this many times when I first started shooting images up here although not until I actually relocated to ‘The Great Land’ did I really see this effect in winter shots.  My eyes and brain compensate for the loss of such cues when I’m just using my normal visual reception but these clues are not reproduced in an image and hence they often look two-dimensional and tending towards a lack of contrast and monochromatic.  As good as my eyes and brain are at dealing with this situation it becomes apparent to me when just walking around this area in the depth of winter; it seems as though everything is composed of either white (snow and birch trees), green (spruce trees) or black (shadows).  The sky will appear blue when clear but it is often overcast in winter and hence it is a shade of gray.   This can be somewhat disconcerting and I can easily see how trying to land aircraft on snow under such conditions causes crashes due to the loss of reference points.

Living in the higher latitudes remains endlessly fascinating to me as there is so much about these circumstances that is quite different from those found in the lower 48.  It often seems as though so many aspects are distorted and done so in the direction of exacerbation; I now more fully appreciate way Alaska is often referred to as a ‘land of extremes’.  I find the more I’m willing to look around me with an inquisitive eye the more I find that fascinates me in my new home.

Taken from my main floor this view is looking SSE across my property; further in the distance but not viewable is Question Lake.  Notice the lack of depth and absence of any feeling of three dimensions…

One of my favorite past times since moving to Talkeetna has been to regularly view the Alaska Range in general and Denali in particular.  In this blog I’ve shared images of ‘the big three’ (Mount Foraker @ 17,400 feet, Mount Hunter at 14,700 feet and Denali @ 20,237 feet) as a group and as individuals.  While all are impressive Denali remains my favorite for its sheer size; it’s just so ‘Alaskan’!  Throughout most of the late fall and winter the mountains were visible mainly on clear days as just snow-covered peaks.  Of late, however, there’s been warmer air that’s carried more moisture aloft and that has translated into more clouds of the layered kind as versed with the just plain thick cloud cover which obscures the range.  The following are a couple of images taken last week of ‘the Mountain’ adorned with some interesting cloud formations.  I’d love to see a lenticular cloud crowning Denali’s majestic peaks – there are both a north and south peak with the north being the highest – but I suspect such a situation would be extremely rare as the winds that blow around the peak are generally very strong and would most likely shred any large lenticular cloud.  However, I am an avid Denali watcher and hope to some day catch such an event.

This image was taken from Mile 5.2 of the Spur which leads from The Parks Highway (AK 3) to ‘downtown’ Talkeetna

This image of Denali was taken a bit later last week and shows a feathery white cloud mass almost conforming to the top of ‘the Mountain’s’ peak.  A careful review of the flanks of Denali reveals some of its rocky massif is visible which is indicative of slowly melting ice and snow due to the warm weather and long periods of daylight which is now around 18 hours of direct sunlight 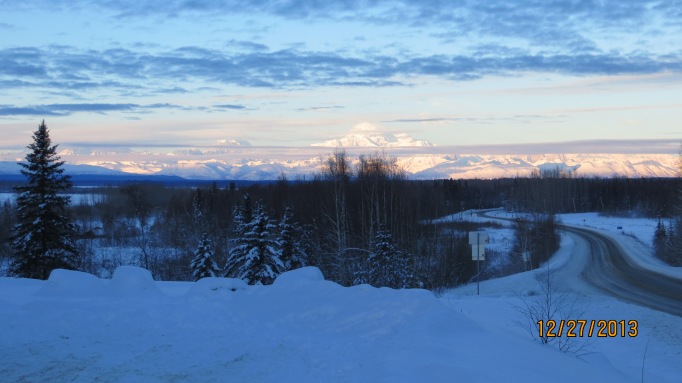 Clouds are just beginning to move from the south ahead of some snow; as they mix with air coming off The Alaska Range they can form some interesting patterns