This will be an uncharacteristically brief entry into this blog as I still have a lot of correspondence to answer regarding yesterday’s powerful magnitude 7.0 earthquake.  But I wanted to let everyone know we came through the event in relatively good shape owing to the fact we were 100+ miles from the quake’s epicenter which was around 7 miles NW of JBER (Joint Base Elmendorf Richardson); the base is on the northern rim of the Anchorage area.  This is not to say we didn’t experience quite an event!  At 08:29 I was working at my desk when I felt the initial shudders within the earth that often presage a tremblor; I paused briefly as the dogs ran into the room and clustered about my chair.  I glanced at the clock and noted the intensity of the tremblor was still increasing as was the noise.  This continued for another 20+ seconds before tapering off.  I was actually gripping my desk to stabilize myself and considering getting under it.  I had heard lots of loud and unusual noises which I later learned were a couple of shelves collapsing and a number of pictures being knocked off the walls.

My damage was minimal and in this I was very lucky; the further south one heads down the Parks Highway (AK 3) the more severe the damage.  I spoke to a dear friend in Willow – around 30 miles to the south – perhaps an hour after the main seismic event; she, her husband and her cat were a bit frazzled but safe.  However, they have many cracked and broken windows and their power was out.  As of Saturday morning I believe this is still the case in much of Willow.  Being true Alaskans, they have two generators and thus are able to power their furnace, fridge, water pump and similar while awaiting the restoration of electricity.  I lost a couple of fragile personal items and when a shelf collapsed in a spare room which contains all my network associated gear my 2 TB NAS fell five feet to the floor.  As it was operational the impact has most likely trashed the mechanical HDDs.  The case impacted on a corner which ‘sprung’ the enclosure; I had to dissemble a portion to get everything back in place and then re-seated the two HDDs.  However, while the unit will power up I never get beyond the flashing ‘initializing’ LED and the system will not recognize the NAS.  I’ve pulled the two HDDs from the enclosure and will see if I can re-initialize them as standalone drives.

Even with these losses I count us very lucky!  The canines were really freaked out by the intensity and the duration of the main tremblor; the frequent aftershocks across the next ten hours didn’t help them regain their composure.  This isn’t surprising as one aftershock was a magnitude 4.2 while another was a magnitude 5.8; either of these by themselves would’ve been noticed up here.  I did notice my GSD (Qanuk) acting a bit flaky maybe a half hour before the main tremor; he was pacing and trying to get really close to me.  While the latter isn’t all that unusual the former was different enough to grab my attention.  None of the dogs liked the experience but Delilah, my newly adopted ‘Russian Bear Dog’ – more properly known as a ‘Caucasian Shepherd Dog’ – did shrug off the entire experience within a few minutes and was snoring again maybe fifteen minutes after the main quake.  She did wake up for a couple of the aftershocks but only yawned, shifted her position a bit and went back to sleep.

Please keep your hopes and prayers focused on the folks in the Anchorage bowl and the western Matanuska Valley and the southern Susitna Valley as they were hammered.  Anchorage is again accessible by road but there is a lot of earthquake damage and it will take months and months to even begin to get repairs underway.  Given it is late fall and snow is on the ground I don’t know how many of the destroyed sections of road can be repaired; perhaps they will only do temporary repairs until spring..?  Thanks for everyone’s concerns! 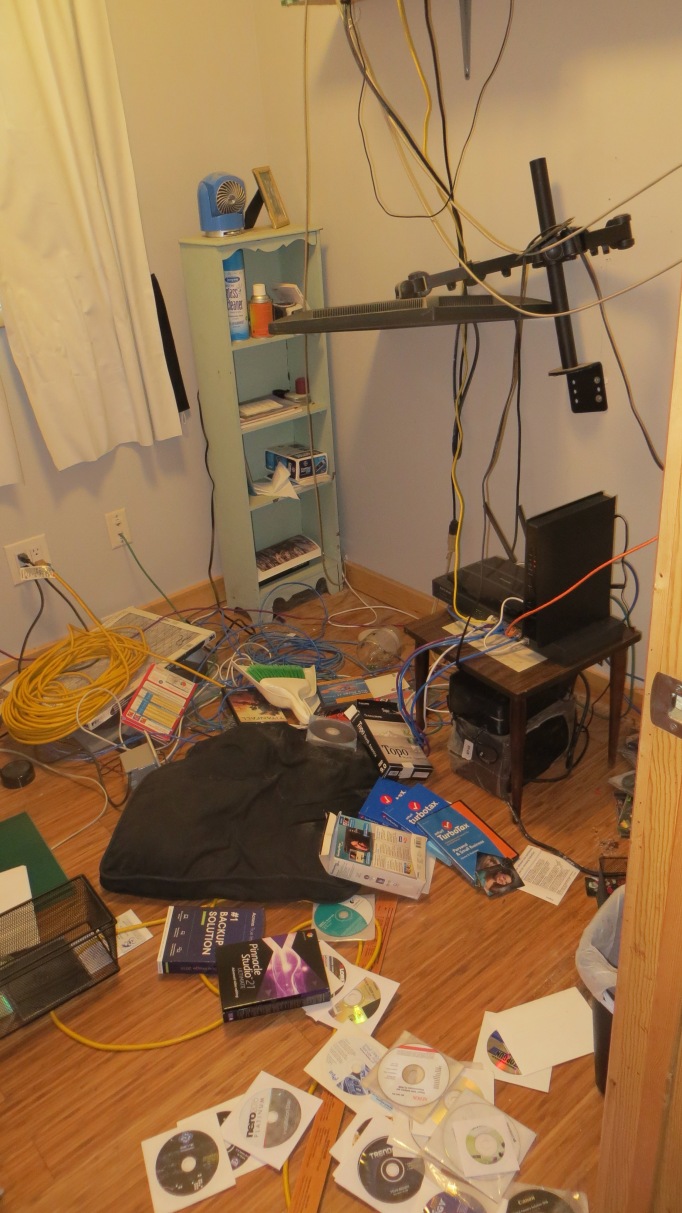 Aftermath of magnitude 7.0 earthquake on 11/30/18; this is the small room where I keep most of my network related hardware