Anyone who has read even just a bit of this blog over the years knows I love winter’s cold and snow and, since moving to semi-rural south central Alaska in 2013, I’ve been very disappointed with the winter weather.  In general, the temps have been above to well above historical averages resulting in rain/freezing rain in January and February – according to long time locals something unheard of just five years back – and often we’ve seen a dearth of precipitation.  The winter of 2017-2018 was shaping up to be the driest winter since I moved up here; this was frustrating because we’ve seen plenty of cool temps.  But we just couldn’t seem to buy any precipitation, at least until this past Sunday (02/11) afternoon…

NWS correctly predicted the snow event and posted a ‘Winter Weather Advisory’ for this area calling for 6″ (15.24 cm) to 12″ (30.48 cm) with localized amounts to 16″ (40.64 cm) but these were expected well north of Talkeetna and in the Hatcher Pass area.  We saw significant snowfall from Sunday afternoon through Monday evening; when all was said and done I measured a total of 14.75″ (37.47 cm).  That was the largest amount of snow I’ve seen from a single snow event since I moved up here and it raised our snow pack from a well below average 25.5″ (64.77 cm) to a respectable 39.0″ (99.06 cm).  Kudos to NWS for a timely and accurate forecast!

To me, this area is at its most beautiful after a sizable snow fall as we generally do not see much wind with such events and hence the trees are shrouded in a thick coat of pristine white.  So I thought I’d share a few images from this most welcome winter snow event: 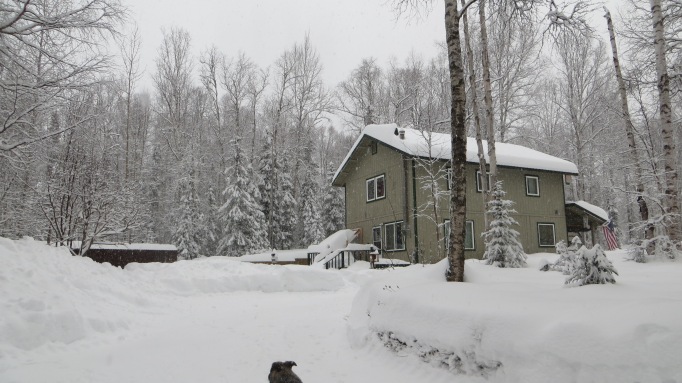 This is how ya clear snow! My neighbor (Roland) at work with is front end loader 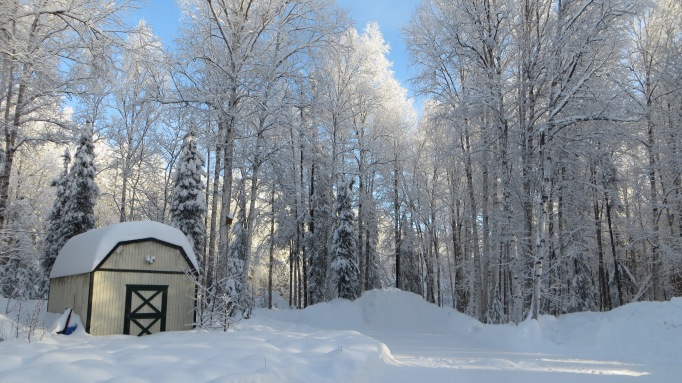 The day after the snow event…