In what was the swiftest transition from winter to spring I’ve yet witnessed across my four winters in ‘The Great Land’ we now find ourselves solidly into spring and starting into break-up.  Just a couple weeks back this area was experiencing daytime highs in the low to middle twenties and night time lows in the negative single digits along with a 32” (81.3 cm) snow pack; now we’re seeing daytime highs in the low to middle fifties and a heavy, dense snow pack of 10.7” (27.2 cm).  I’ve already killed many mosquitoes but to this point they’ve been those that ‘over-wintered’ apparently by hiding in decaying organic matter before the snow accumulated which generates enough heat for them to survive.  They are large, slow and noisy mosquitoes and hence easy to locate and kill.  As soon as we see much in the way of standing water within and around the periphery of the boreal forest these insects will lay eggs which will soon hatch into larvae that will become hoards of the much small, much quieter and far more ravenous mosquitoes I so abhor.  So it goes; this is south central Alaska…

As the snow dwindles and the temps rise so, too, does the daylight.  As of this writing (04/13/17) we’re already seeing 14 hours 41 minutes of direct light on our way to 19 hours and 55 minutes come the Summer Solstice on June 20th at 20:24.  Even without all these cues I’d know spring was upon us simply by observing the rather ‘flaky’ nature of my female Alaskan malamute (Anana); her behavioral changes are no doubt driven by hormonal shifts and while I’ve seen similar changes in other canines she really becomes wacky.  She is much more aggressive towards other animals – but she remains so loving of anything on two legs – and she is starting to ‘cock her leg’ when she pees.  She is also becoming even more headstrong than usual – I know of no other breed which is natively so headstrong – and she refuses to listen to me much at all.  Because of this I can only walk her at times when there are no other people with dogs out and about or I have to keep her on her lead.  I hate doing the latter as she spends much of our walking time sniffing out wildlife spoor and similar as well as running after Qanuk, my male GSD.  Assuming this spring is like all those previous this phase will last for maybe three to four weeks before she reverts to her generally mellow and regal self.

With the advent of spring I’ve taken to walking both dogs in the early morning hours when the air temp is still a bit below freezing and the ground frozen.  This area was once buried under glaciers and as the ice retreated it ground up inestimable rocks leaving behind a fine gray silt often called ‘glacial flour’.  This ‘almost dust’ clings to anything wet and the dogs are very skilled at getting their coats damp by breaking ice and wading in puddles.  The muddy result is almost impossible to remove with a wet towel; it has to dry and then slowly fall off their coats.  When walking them in the afternoon when the ground is soggy they are covered in dirt and I generally force them to spend 90+ minutes in the mud room after we finish.  This allows maybe 50% of said mud to fall off but that still leaves more than enough to make my floors ‘crunchy’!  Not that I needed the assistance but I can easily locate all of Anana’s favorite sleeping areas just by looking for the layers of gray silt she leaves behind.  This is life with two large canine companions in semi-rural south central Alaska.  It can be a pain but I wouldn’t do without my two family members just because of a bit of mud!

I’ll leave you with a collage of recent images and a few from previous springs as well; I hope you enjoy the beauty of Alaska’s spring! 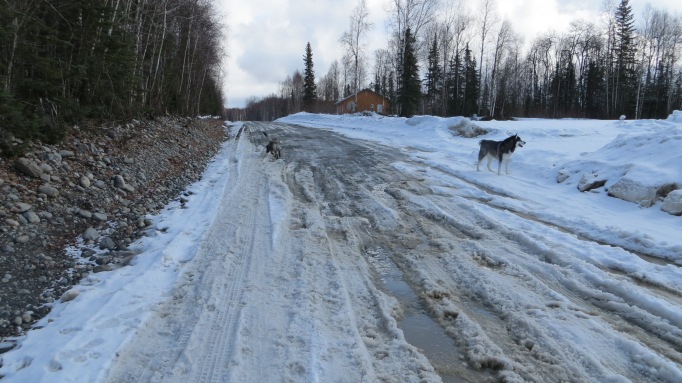 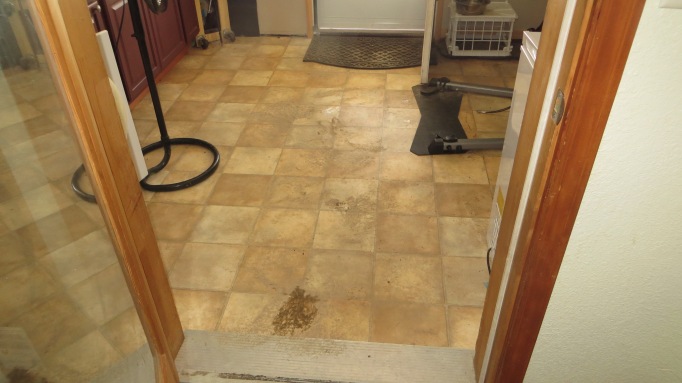 This is why Alaskans are careful about where they park their vehicles during the spring thaw!