In a way I feel profoundly unqualified to write this piece for although I am 63 years of age I am continually discovering just how ill-prepared I am for my advancing years.  In hindsight I largely behaved as though I was ’18 and invincible’ until a foolish misstep on March 27, 2015 yielded a severely fractured left radius and ulna and forced me to recognize my own mortality.  Thirty eight thousand dollars and a session of major orthopedic surgery later I began to learn just how unprepared I was for life as a sexagenarian. 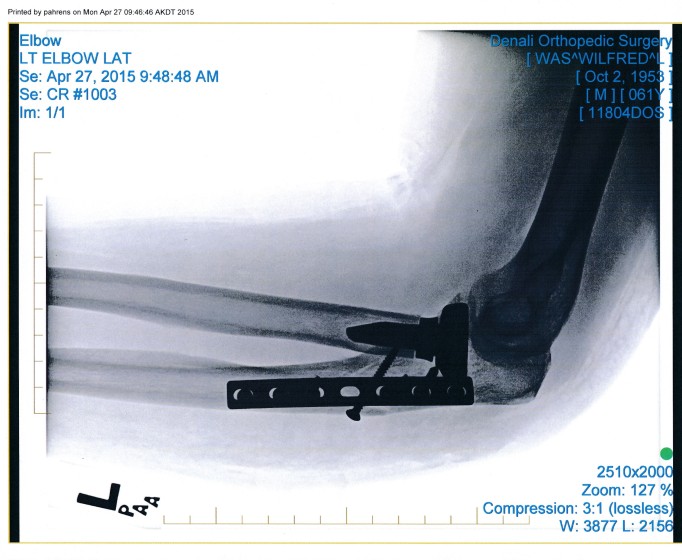 Serious hardware required to repair my left elbow and left radius and ulna!

Looking back my preparations for aging were not helped by almost perfect health across my first five and a half decades; I suffered nothing worse than ‘pleurisy of the diaphragm’ – something that sent me to the hospital emergency room three times in my life – and the infrequent bout with the flu as well as a few cases of what could only have been potent staph food poisoning.  As I aged I watched so many of my peers start to struggle with back, neck and joint issues while I just continued to march forward.  I’d always struggled with my weight although I’d managed to remain perhaps eight to twelve pounds heavier than I should have been for most of my working life.  But, regardless, I cannot damn a life of great health especially as so many out there would probably kill to experience what I did in terms of a lack of health issues.

The aforementioned accident in March of 2015 really forced me to re-evaluate just how I was living in so many ways.  Because it left me with virtually an artificial left elbow along with a plate and six bone screws in my left forearm I was forced to give up any activities which involved impacts of any kind.  Sadly, the one exercise I truly enjoy is splitting firewood; that is now just a fond memory.  My left arm is probably 85% of what it was before the accident but for some unknown reason my left wrist – apparently uninjured in the fall – became very painful in June of 2015 and remains so to this day.  I proceeded to learn the truth of something a friend had shared with me; “You do not want to be of ‘interest’ to Western medicine!”.  I spent another $5,000 plus on tests including a bone scan but nothing revealed any cause for the pain.  At this point my left wrist is maybe 50% of what it was before the accident and hasn’t really improved much since it first began to ache.  This may well be as much recovery as I’m going to see.  My surgeon gave me two choices; learn to live with the situation or undergo another surgery to remove the plate and screws.  The latter is totally unknown; he cannot guarantee this will help and cannot even guarantee the operation wouldn’t make the arm/wrist worse.  I’ll wait until March of 2017 and then re-evaluate my healing.  Hopefully, by then, I’ll be able to make an informed choice.

But much more has changed since that March day in 2015; I still bear the mental scars of taking such a sudden, nasty fall and it has forced me to be very cautious when it comes to uncertain footing.  Given all the ice we’ve experienced across the past two winters this means I rarely get outside from November through April unless I put on traction ‘slip on’s’ and use my walking staves.  Even then I cannot escape a sense of dread whenever my feet slip.  I also believe something happened regarding my sense of balance which was never all that great; nowadays I’m much less steady on my feet and I’m flat out unwilling to put myself more than a few feet off the ground be it on a ladder or similar.

Everyone is aware as we age our faculties tend to become less sharp and are ‘off line’ more often.  Our physical prowess also tends to fade with the years as does our ability to fight off illness and especially to quickly recover.  For some of us this means we begin to lose faith in ourselves and our abilities; needless to say this is not good.  However, refusing to acknowledge aging can and does remove the ‘mind’s edge’ is also rather unhealthy as it leaves one vulnerable to making perceptual or memory related mistakes and then exacerbating them by refusing to consider one might be wrong.  This is a very fine balancing act and one I’m really struggling to find that point of parity.  I sense my accident and its fallout truly pushed me too far in the direction of self-doubt and uncertainty regarding my abilities.  Such a shift was probably good in terms of what I was willing to physically undertake and/or endure but not so good regarding my mental faculties.  With respect to the latter I feel I must come to embrace the idea that while my mental abilities may not be what they were ten or even five years back they are far from useless especially when factoring in experience.  And I should be pleased I’ve learned the surety of my youth hasn’t translated into me being unable to accept the lessening of my mental capabilities.  In the end a bit of healthy respect for memory ‘slippage’ and/or perceptual incongruities becoming more evident with my passing years is most likely a very good thing.

While I’ve been saying more and more often ‘this aging thing isn’t for the faint of heart’ I also recognize that regardless of its problems it does beat the alternative.  It is so very important to remember these concepts on those mornings when just getting out of bed after the previous day’s exertions can be a painful process.  For those of us lucky enough to live into our sixties, seventies and beyond inculcating a sense of celebrating our lives becomes more and more important.  As with so many other things in life if we allow ourselves to become mired in the minutiae we lose touch with ‘the big picture’ and this never produces a positive effect.  As stiff or sore as I might be some mornings I also know there’s a gel cap of Naproxen sodium in the bathroom medicine cabinet that will ease most of the pain.  Regarding my slowly declining mental facilities…well, I still function and the longer I live the more experience I have to call upon!  And, too, I continue to develop even more memories involving life in ‘The Great Land’…