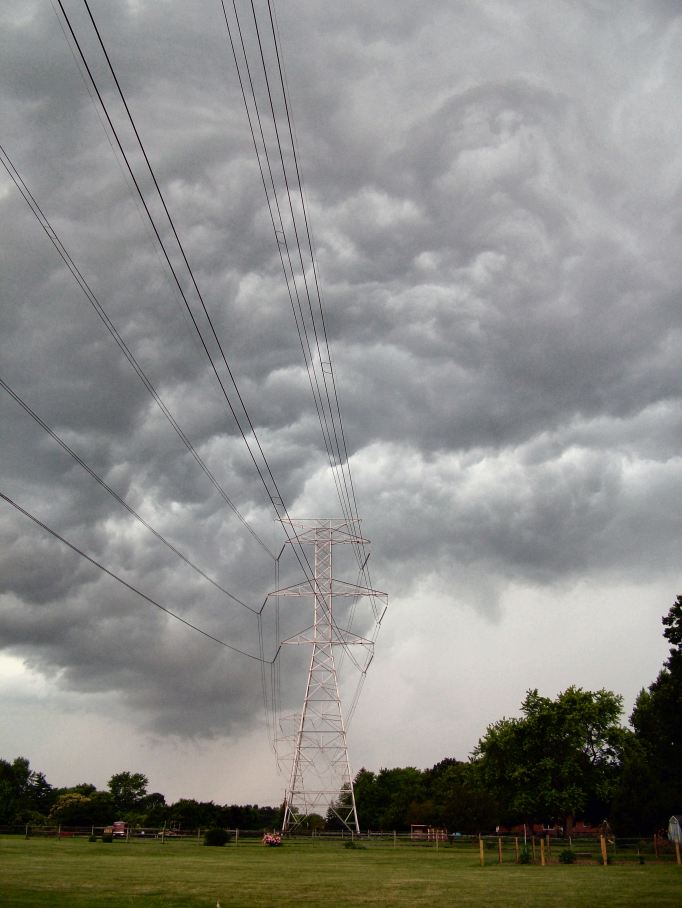 Boiling cloud line before a thunderstorm in West Chester, Ohio

As those of you who follow this blog are well aware I am fascinated with weather and gravitate towards the extremes in particular.  Growing up in the Midwest I saw all kinds of extreme meteorological conditions from ice storms to heat waves, blizzards to cold snaps and tornadoes to severe thunderstorms.  Without question one of my favorite kinds of intense weather involves the aforementioned severe thunderstorms.  There is something just so energizing and exciting about powerful storms capable of dropping hail and heavy rain as well as lighting the sky with intense lightning followed by explosive thunder!  While living in SE Michigan I became a trained weather spotter for the NWS (National Weather Service) and functioned in that capacity while living in the Cincinnati area as well.  I knew when I relocated to south central Alaska I was would see far fewer thunderstorms and those I did experience would be much less intense.  We just do not have the necessary long term heating along with sharply defined cold fronts or ‘dry lines’ traveling at high speeds and able to crash into hot, humid air masses.  We do get some uplift based on the geography – mainly the many mountain ranges – but these storms rarely reach moderate levels let alone severe.  In general our thunderstorms are mainly what some call ‘air mass’ storms which are of mild to moderate intensity, generally form against mountain ranges in the afternoons and quickly fall apart once they push off the front ranges.

I never expected I would so miss strong to severe thunderstorms nor did I realize just how much a part of my daily spring to summer existence was defined by the flash of lightning and consequent rumble of thunder.  But as I reflect upon the lack of thunderstorms in south-central Alaska I also remember I was not always so fond of these events.  In fact, when quite a bit younger, I was actually terrified of that ‘flash-crash’ sequence so much I couldn’t sleep when thunderstorms were active.  To this day I do not why I was so terrified; I’d never had a bad experience with said storms nor did I know anyone who had endured anything negative from such storms with the possible exception of a flooded basement.  But there was no denying my fear.  It became so bad my father finally decided to intervene; he began to take me out on our back porch when thunderstorms were rolling in and explain to me what they were, how they worked and how to count the seconds from a lightning flash to the resultant thunder as a means of determining a rough range to the lightning (by counting the number of seconds from the flash to the thunder and then dividing by ‘five’ to get the miles away).  Thanks to his patience my ungrounded fear slowly bled away and I came to truly love strong thunderstorms.

In fact, my love of strong thunderstorms grew to the point I often would wander outside during such storms just to experience their power and awe ‘up close and personal’.  In general this wasn’t really dangerous, although by today’s wimpy standards such behavior would be defined as ‘extremely dangerous’, but a few times I was most definitely ‘in harm’s way’.  More than once I’ve smelled ozone after a very close lightning strike; one must be almost ‘danger close’ to be able to perceive this odor.  And one time I actually ‘felt’ the remnants of a very strong,  close by strike.  Given the rain such storms generate I was almost always walking bare foot and this time was no different.  I remember the ‘flash-boom’ sequence being almost instantaneous meaning a very close lightning stroke; it was followed by a mild electric shock at my feet.  In hindsight I was far too close to said strike but luckily for me all I received was a warning shock..!  None of these experiences dampened my enthusiasm for powerful thunderstorms and I still possess said enthusiasm.

Back in May I was awakened around 04:00 by a loud blast; in a nod towards both how few thunderstorms I’ve seen since moving up here and how much I’m becoming an Alaskan upon being awakened I first thought it was an earthquake.  But then I heard more thunder off to the WSW and I knew it had been a healthy stroke of lightning from a thunderstorm.  Both my canine companions, Anana and Qanuk, appeared at the edge of my bed obviously concerned regarding the sudden, loud noise so early in the morning.  I sat up and took a few minutes to assure them everything was fine and it had just been thunder.  Then I saw another flash and immediately arose, put on some clothing, went downstairs and out onto the back porch to watch the show.  I was only outside for maybe a minute before I came back indoors and liberally applied a coating of ‘Deep Woods Off’ before returning to the back porch with my canine companions.  Although both remained a bit skittish regarding the thunder we had a great time.  During this it occurred to me I was passing on my father’s wisdom in soothing the dogs and assuring them there was nothing to fear.

Funny how someone could be so terrified of a natural phenomenon, learn to understand and then appreciate it, come to truly revel in its existence and then end up moving away from it and sorely miss its presence.  Life is all about choices and their consequences; I knew when I decided to relocate to Alaska I was basically giving up the opportunity to experience severe thunderstorms.  I had hoped maybe extreme winter weather might make up for the absence of said storms.  While I truly miss strong to severe thunderstorms I also truly love my ‘new’ home so this is one time I’m still ‘okay’ with the consequences of my decision.  But I’d be lying if I do not admit to eagerly watching as clouds darken the sky, hoping maybe I’ll once again see that flash and hear the resultant thunder…

Severe thunderstorm over Cincinnati as viewed from a northern suburb (West Chester, OH)