Last Friday I was sitting in the KTNA studio riding herd on the soundboard as KTNA broadcast one in its series of live summer concerts – “Live At Five” – from the Talkeetna Village Park.  Although the concerts go on ‘rain or shine’ I had been wondering about that day as it had rained fairly substantially from very early morning right through until maybe 15:30 and was just beginning to clear up by 16:20.  As I left for the station around 16:30 I made my typical swing by the refuse reclamation site to drop off a bag of waste and then stopped by the PO to check mail before ending up at KTNA.  As usual the board was set up, the sound checks already made and my introduction and close out neatly typed up and awaiting me on the desktop.  With just ten minutes to go the skies actually cleared and we had yet another good Friday afternoon for a live concert.

I kicked off the broadcast right at 17:00 with the brief introduction and then settled in to monitor the soundboard.  Generally nothing is required although on the odd occasion the talent might get a bit ‘energetic’ with their performance and thus require a tweak to the output levels on the board.  This was not the case this Friday and I enjoyed the broadcast while futzing with my laptop which I intended to use as the music source for my Monday evening show.  Prior I’d been using iTunes on the studio Mac but I’ve had a real ‘love-hate’ relationship with that app and that Monday it had really screwed up my show three times.  I swore that was the last time and hence decided to use my laptop.  Given I had almost an hour and was in the studio I verified I could use the new software I’d just downloaded and get the necessary output at an acceptable level.  Once finished I started prepping for my Friday evening newscast which runs from 18:00 to 18:25.  In so doing I went over the weather, news, announcements, classified and ‘Denali Echoes’ which is a service for local listeners without phone service.  Because the day had turned out so well I left the blinds up in the ‘fish bowl’ – a name many folks apply to the studio in the cupola on the main floor (see the following image) – to enjoy the sunshine. 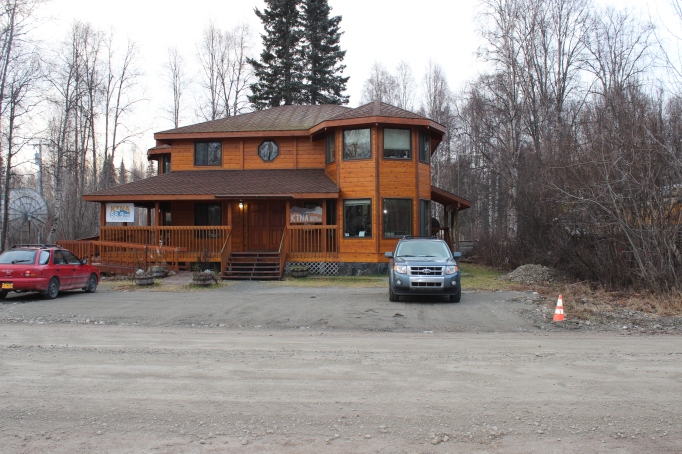 With about four minutes to go I happened to notice a small white car pull into the KTNA lot.  As I made sure everything was set on the soundboard for my interruption of the concert so I could give the 18:00 local newscast I noticed an elderly gentleman slowly climb out of the car and shuffle up the steps of the porch and try the front door of the studio building.  As it was just shy of 18:00 the staff had left for the week and the door was locked.  He turned my way and saw me sitting at the board; he then turned and walked to the porch window to the studio.  Just as he did so we hit 18:00 and I broke into the concert with the closing teaser.  He evidently didn’t realize I was broadcasting live as he proceeded to knock on the glass.  I was just finishing up the closing so I held up my index finger in that universal ‘one second’ gesture, finished the close out and went to music.  I then removed my headphones are walked to the window.  He proceeded to to show me a worn wallet which he said he’d found and someone had told him to bring it to the studio.  I apologized, told him I was broadcasting live and asked him to just leave the wallet on the supporting frame of the easel on the front porch.  The windows have screens which aren’t easily removed so I couldn’t take it; in addition the main office area and front door are closed off when the staff leaves for the day so I couldn’t easily walk around to get the wallet.  He obliged and I quickly thanked him and dashed back to the board so I could get the newscast underway.

I slightly misjudged the time required to handle all the information and had to scramble to get everything squeezed in but I did make the hard break at 18:25.  I arose, stretched and walked to the back door which I exited, walked around to the front porch and retrieved the wallet.  I had made a brief announcement right at the termination of the news that a wallet had been found and was being held at the KTNA studio.  As I walked back to the side door and worked the lock I was deciding how to notify the staff and volunteers of the ‘find’ and where to put it.  I returned to the studio to tidy up so the next volunteer coming in for a Friday night music program would have everything set up as expected.  While doing so I observed a young man walking east on East Second Street and angling towards the studio; he was wearing a rather concerned look.  When he turned to the porch steps and began to climb I was sure I had the owner.  He tried the front door before I could get the window open once again.  He recounted how he’d lost his wallet in town and had been told to check the ‘radio station’; when I held up the wallet his face broke into a huge smile.  Just to be sure I asked him his name and verified it matched that on the driver’s license.  Then I explained I would come out the side door and give him his wallet.  I walked to that door and met him at the side of the studio.  As he gratefully accepted the wallet he thanked me and I told him it was our pleasure and I hoped everything was intact.  He quickly rifled through the wallet and then said; “Thank God for small town America – even all the money is here!”.  I told him I was happy for him and wished him a good week; he said now that he had his wallet back he was definitely going to do just that…

As I finished prepping the studio and drove home I kept thinking just how great it was that this community has such honest people within its ranks!  Someone could have just kept the wallet or even taken the money but turned it in yet this didn’t happen and the wallet and its entire contents were returned in full.  This is such a simple thing yet especially in hard times this speaks volumes as to the honesty of an elderly gentleman which allowed a young man the opportunity to enjoy his weekend.  It made me feel good to be a member of this wonderful community.  It also reinforced the valuable service KTNA supplies; because it is the local voice of the Upper Susitna Valley it is also a clearing house for information and someplace most folks know of and use.  I’ve lived in this area for almost a year now; previously I lived in many places in the Midwest – mainly around medium to large cities – and I can tell you getting a lost wallet returned with all its contents would be a news worthy story.  Yet here in Talkeetna it just seemed so ‘everyday’.  Not that I needed it but as I pulled into my driveway I realized I had yet another affirmation that I really did make a very wise choice when I loaded up my household and made the 4,200 plus mile drive to my new home in Talkeetna!

One thought on “Talkeetna Character…”