I awoke this morning to the sound of rain against the metal roof and my German Shepherd Dog’s (Qanuk) slight but definite urgings that even though it was just 05:43 it was time to get up.  Qanuk doesn’t have my Alaskan Malamute’s (Anana) manners; she has always shied away from any interaction with me in the morning until I am awake.  Not sure why this is, I only know it to be true.  Qanuk lies next to me and very softly ‘talks’ to me with a series of grunts, groans and whines; if I in any way acknowledge his amazing repertoire of vocalizations he immediately increases both the volume and the repetition of his noises.  He knows if he does this long enough he will eventually make such an absurd noise that I will bust out laughing and then I have to arise.  I’ve encouraged both my canine companions to be vocal with me and while this is a dual edged sword I do enjoy ‘talking’ with them.

Anyway, as I stretched out my legs prior to arising it occurred to me I hadn’t heard that rhythmic ‘tap tap’ of rain against the roof since last fall.  I warned Qanuk as I arose that he wasn’t going to like the morning weather as it was raining; of late I’ve been taking both dogs out for an early morning walk to start accumulating my current target of 8,000 daily steps (working on making 10,000 daily steps) and to allow them to stretch their legs and work those ole noses.  However, given the 40 F air temp and sheeting rain this would not be one of those mornings.  Still and all it was soothing to again hear the rain and see it peppering the white and black pines and birch trees outside my kitchen window as I prepared my morning coffee.  I began to reflect upon my first ten months in Alaska from an environmental perspective and then compared this to what I’ve experienced while living in the lower 48.  No surprise in many ways its quite different and true to ‘Alaskan reality’ most of it is exaggerated over what I experienced in SE Michigan and other Midwest locations I’ve called ‘home’.

Fall is the season with which I have the most Alaskan experience as I not only experienced a full season last year but in my previous trips from 1996 through 2005 I almost always visited in September.  Last fall was rather aberrant in terms of precipitation with September seeing 192% of normal rainfall and October a whooping 291% of normal; in addition both months were well above normal in terms of temperature.  The beauty of fall in the lower 48 is based largely upon hardwood trees and there just are not many of these in south central Alaska so our fall colors are mainly yellow and gold.  In addition the time the first leaves began to change color until winds blew the last of them from the birches was just a bit more than two weeks.  And this occurred by early October which is far earlier than I experienced in the lower 48.  November started out warm but finally succumbed to the Arctic air and our first measurable snowfall was a 13″ dump across November 9th and 10th.  This was a bit earlier than I was used to seeing in SE Michigan.

Our winter was truly anomalous and in a huge way.  November was actually a bit cooler than usual with December seeing a bit above normal temps until the end when it started into an extremely warm cycle which extended across almost all of January.  In fact, January 2014 set records all over the state for warmth and was the warmest on record for this area.  Our precipitation all but vanished which was a good thing because when it did occur it was often nasty freezing rain.  February saw more seasonable temps occur but the snow did not return; we ended our winter precipitation with just 33% of normal snow pack by early April.  While much of the lower 48 set records for a harsh winter Alaska set records for warmth and lack of snowfall.

Spring arrived early and with it break up occurred much earlier than normal.  I was house hunting up here from April 7th through April 13th in 2013 and waded 30+ inches of snow pack and saw day time highs well below freezing and overnight lows often into the minus single digits and even a couple of minus double-digit mornings.  Yet by April 1st this year we had only a foot of mostly ice remaining on the ground and it vanished by the end of the month.  The locals tell me this was at least a month early but then the air temps in April continued the well above normal routine.  With the dramatic increase in sunshine its easy to see why the spring seemed to just explode upon the landscape; we had a muddy period common to break up but it only lasted for maybe 10 to 12 days and from what I was told that’s about half the usual time.  By early May the snow and ice were history and the mosquitoes out in force; of course they were biting while there was still a foot of snow/ice on the ground so this wasn’t a surprise.  Around the second week in May the birch trees suddenly exploded into life by shedding incredible amounts of yellow/green pollen followed by leaves; within a week all the trees were sporting leaves and within another week they were fully dressed down in summer plumage.

And so it is I find myself wondering what the summer will bring.  Granted I did experience almost all of August up here last year but it was largely showery and warm.  There’s no doubt the mosquitoes will be nasty but I have discovered ‘Deep Woods Off’ which functions amazingly well in this mosquito saturated environment.  After applying it to any exposed skin I’m actually able to spend hours outside and suffer only a few bites even as I’m working and sweating.  As stated I use this on any exposed skin and rub dryer sheets on my external clothing and I’m good to go.  This is a miracle as I’m a true ‘mosquito magnet’!!  I’m dealing with the current dearth of darkness as best I can; it never gets dark any longer and as of today the sun rose at 04:25 AKDT and will set at 23:33 AKDT yielding 19 hours, 8 minutes and 7 seconds of direct light.  And we’re still three weeks from the Summer Solstice!  I knew from previous experience the extended light would be more of a challenge for me than the darkness of winter and that’s been borne out thus far.  In true Alaskan style I’m learning to adapt to the extremes although I still prefer the extended darkness to a total lack of night.  I’m not exaggerating the latter; I was up at 02:20 this morning and outside it was light enough to clearly see the trees, their foliage and even ground features – I believe this is termed ‘nautical twilight’.  And this was with a solid overcast as well.

Local wildlife have their own rhythms within the seasonal cycles; the moose are largely ubiquitous although they do disappear from early April through early May when I believe they are birthing their spring calves back in the boreal forest.  The bears are around from middle to late April through early November.  The foxes (mainly Red) seem to be year round as is the single Wolverine that apparently calls this area ‘home’.  There is a shift in avian population with the waterfowl, robins and similar disappearing in October and returning in early May.  The Chickadees, Downy Woodpeckers and Red Breasted Nuthatches seem to winter over as do the huge ravens which can almost rival the Bald Eagles in size.  I didn’t see the large Magpies during winter but they are once again in attendance now that its warmer so they may migrate as well.  There just are not a lot of Red Squirrels in this area but I know they remain across winter.

I’m only now (May 31st) beginning to see a few flowers in the boreal forest, most are small and tend towards white although I’ve seen various shades of red and some purples as well.  I know there are many blossoms to come and I suspect this will occur within a week or two.  Without question as spring arrived Nature seemed to go into overdrive regarding life; it literally is an explosion unlike anything I’ve previously witnessed.  Given the abbreviated growing season I guess it’s no surprise that once spring arrives its in a hurry to get down to business.  I’m now coming up on having spent all four seasons in my new home and without question I remain fascinated by and enamored of this magnificent land.  Living up here truly is a ‘give and take’ situation as learning to deal with the mosquitoes and tourists of summer as well as the rain of the late summer/early fall and the mud of break up can be a challenge but then overall its just part of amazing Alaska.  I feel so privileged I can finally live within its mystery and majesty; doing so has really nourished my soul as well as brought me into a much closer relationship with Nature and I couldn’t ask for more.  As such its a true pleasure just to experience Alaska’s many moods and learn to live within her extreme conditions.  Let the adventure continue…!! 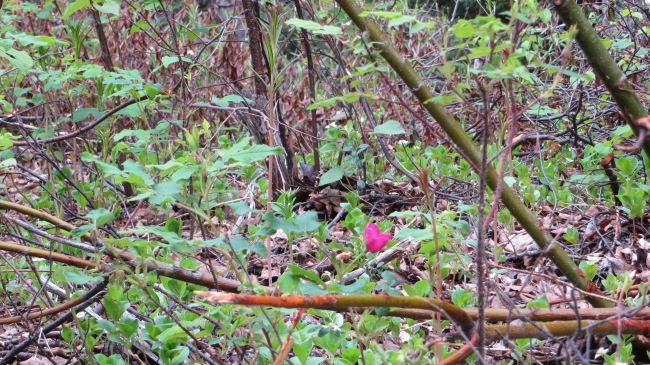