In keeping with the ‘winter that wasn’t’ and the mild fall our break up has come earlier than usual and now spring is in full bloom.  We’ve seen five consecutive days of high temps in the fifties along with abundant sunshine.  The icy roads have finally surrendered to the warm sun’s kiss and now they are mainly just muddy although the higher points have also dried off to the point they are becoming dusty.  I see the ‘average’ highs in April for Talkeetna are around 46 F but we’ve been easily five degrees above this value; interestingly the average low is listed as 26 F and we’ve been right on that mark.  We’re approaching 16 hours of daylight on this Earth Day but the eastern sky begins to lighten around 05:10 AKDT and there’s faint light in the western sky even at 22:45 AKDT.  More and more bare patches of earth are visible in the boreal forest although anywhere the winter’s snow was heaped such as the sides of the local roads there are still piles of wet, rotting snow and ice.  While walking my dogs yesterday late morning I took the following image from around intersection of East Barge Drive and the Spur; it’s looking east down East Barge towards some foothills of The Alaska Range which are still solidly cloaked in white.

Every day I see more and more returning birds and I’m hearing more Red Squirrels as well.  The moose remain absent after being virtually ubiquitous the last ten days of March and the first few days in April.  I suspect the cows are back in the forest birthing their spring calves; with this underway the appearance of the local bears cannot be far off.  As soon as the low temps stop dropping below freezing I will hang my Hummingbird feeder; actually given the amount of sugar in the water I could hang it now as the high concentration of soluble solids will depress the freezing point of the water based mixture quite a bit.  Today I hope to place at least one of my Field Swallow birdhouses; I need to get them up so the returning swallows can hopefully build their nests within them.  All told spring has definitely ‘sprung’ for Talkeetna and the timeless dance of the seasons continues in full force.

I knew Alaskan insects were a breed apart in terms of being hearty since June of 1997 when I observed live mosquito larvae swimming in a small pool of water collected in a depression on a piece of ice in Denali NP&P!  Sure, the air temp was in the upper forties and it was sunny but that water had to be just above 32 F.  In the lower 48 one rarely saw insects in action while snow remained on the ground but this is definitely not the case in Alaska.  While writing some email over the weekend I happened to glance outside my office window on a late albeit sunny Saturday morning; to my surprise I could see numerous winged insects of various sizes fluttering about in the warm air.  When I really started observing I quickly counted fifteen flying insects just in my field of view and I know there were many more.  Even more surprising was having to brush away a mosquito yesterday early afternoon as I was working around the front porch.  One wonders how these little beggars survive night lows in the middle twenties but they must manage as once it warms up during the day they are very active.  Yesterday I took the following image of the sensor platform of my Davis Vantage Pro 2 wireless weather station mounted in my front yard.  Notice the unbroken snow in the background; it’s still around a foot deep in that section of my front yard.  If you look closely at the solar cell area you can see a large fly.  It was largely immobile soaking up the sun but when I caused a shadow to pass over it the fly did indeed take flight.  It never ceases to amaze me just how tenacious Nature can be; life will find a way even under harsh and demanding circumstances! 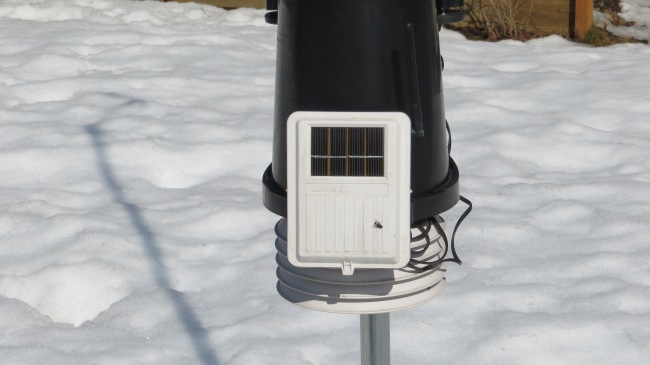