In conversations with my realtor and good friend Holly she’s often stated that break up is her least favorite time in Alaska; in talking with other Alaskans I’ve heard this same lament.  In my ignorance I wrote a while back I couldn’t see how it could be any worse than last September and October when we saw 191% and 292% of normal rainfall for those months.  Hah, once again Alaska has shown me I’d best just keep my mouth shut and my eyes and mind open at least for the first few years I’m up here because I’m discovering why break up is not such a great thing to endure.  While its great to see the sun climbing higher and higher in the sky and the temps slowly warming as the ice and snow begin to give way they leave behind a real mess as evidenced by this image taken at the intersection of the Spur and East Barge Drive maybe 0.4 miles from my home. 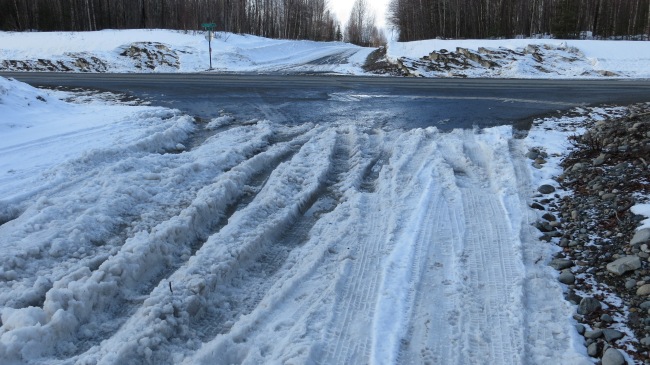 The remaining snow is really more rotting ice than snow and its often very slippery.  The ruts in the above image are six to ten inches deep; while my Escape is hardly a true off-road vehicle it does have a relatively high ground clearance and I bottomed out driving through this mess earlier today.  The remaining ‘ice pack’ is heavy with water and truly tests the waterproofing of hiking boots.  My trusty pair of mid-weight hiking boots went through the winter snows keeping my feet warm and dry but just 30 minutes of slogging through this mush and I could feel the beginnings of water seepage on my socks.  I do have a pair of ‘break up boots’ which are really just knee-high rubber wading boots; I can see where these will be coming in very handy across the next few weeks.

More and more areas of bare ground are appearing especially during sunny days; the sun is already strong enough that it can melt the snow and ice even if the air temperature remains a bit below the freezing mark.  Of late the temps have been dropping into the single digits by early morning but rising into the upper thirties to middle forties by late afternoon.  This morning we’re seeing a bit of snow but as of 08:38 AKDT the temp is 31.1 F on its way to 40 F so whatever small accumulation of snow we get will melt especially if the current light snow turns to rain.  The cooler overnight temps re-freeze the melted snow and ice and this makes morning walks a bit slippery; this morning it was downright treacherous as there’s maybe 0.4″ of fluffy snow covering the roads and the ice.  Of late I’ve taken to carrying one of my snow shoeing poles with me on every walk simply because a tripod is more stable than a bi-pod.  The dogs just love to get out and run regardless of the conditions although the slippery surfaces have caused a few hilarious ‘crash and burn’ events especially when they are playing while running.  I can see that until the snow and ice completely melt the footing will remain questionable and one must often devote more attention to the ground and its condition than is normally true while walking.  The birds are beginning to re-appear with the most notable being Trumpeter Swans again populating the marshy lake area just outside Talkeetna.  The moose were very common across the last week in March and for the first few days in April but now have completely disappeared.  I suspect the cows may have returned to the forest to birth their spring calves; if this if correct than the grizzlies should soon be emerging from their hibernation as they are in sync with the birth of the moose calves.  This allows them the opportunity to get a solid meal of protein which they need after hibernating all winter.  In addition many of the sows will have their own spring cubs and that’s always a bit of a concern as grizzly sows are very protective.  Once bear signs have been confirmed I’ll be carrying my ‘Counter Assault’ pepper spray for a month or more when walking the dogs.  While it’s a rather uncommon treat to see a grizzly in the wild around Talkeetna it’s hardly a rare occurrence and if one is observant there are grizzly signs all around this area in season.  The reappearance of these apex predators just means that all us locals have to once again be ‘bear aware’ and ensure that any sloppy habits from the winter like putting garbage outdoors are corrected.  I do enjoy living so close to so many large mammals and that’s part of this area’s charm; we humans are really the trespassers into the kingdom of the grizzly and moose and hence we should learn to co-exist with these magnificent animals.