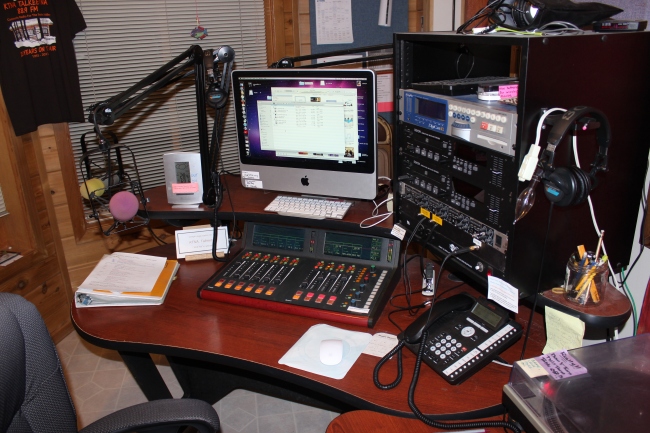 One of my current favorite places in Talkeetna!  This is the main studio in the KTNA building and is really a view of the desk area.  To the lower right you see one of the two manual turntables and underneath them is another cabinet of equipment.  Moving further to the right there’s an ancient cart machine with two single disc CD players beneath it and then a control panel for auxiliary inputs like iPods, MP3 players and similar; finally the telephone is beneath all that stuff.  Further right is the Mac which handles a myriad of duties including displaying the NWS weather reports, ADOT road condition reports, playing the sound bites that identify underwriters, sound clips of show promos, pre-recorded news stories from the KTNA news department local to the Talkeetna area and access to the KTNA.org website.  On the desk beneath the Mac is the sound board which controls what inputs are going to which outputs along with which pots are active, the gain on each pot and provides a pair of digital ‘Vu meters’; the board is fully programmable and along with the Mac forms the backbone of the newscasts.  A bit further to the right you can see the digital temp readout for the station’s exterior thermometer (silver square) and then two of the three studio microphones; the main mic is the pink one while the other two are used with in-studio guests.  All in all I’m still learning to use the gear and make regular and often painful mistakes but I’m finding I really do enjoy the work.

Just another one of those ‘stretches’ I seem to be enamored of since retiring..!  This is especially true as I had no experience with anything like this previously and as a child I stuttered to the point I had speech therapy and hence harbored an all-consuming fear of speaking to unknown people and especially in front of groups of people.  During some of my corporate time I handled field training at plants, sales offices and warehouses which often required giving one to two-hour classes on Microsoft OS’s and apps which were being rolled out across the firm.  Because I so wanted to make the move into IT from my current position in Food Manufacturing Technical Services I lobbied hard to get this opportunity knowing I would have to face my fear of standing solo in front of ten to thirty people and talking for hours.  I was terrified my stuttering would reassert itself but to my surprise I discovered I did enjoy acting as a trainer and based on feedback from sites around the country apparently I did fairly well.

Even so this is not the same thing and in some ways it’s not as bad yet in others its worse.  I’m not standing or sitting in front of physical beings like I did while providing the IT training so in this sense it’s probably a bit easier.  However, there’s still the pressure of knowing this is live and thus if you make a gaffe its out there for all to hear.  In addition ya have to make sure you fit in all the really important information like news, weather, underwriter IDs, Denali Echoes (a messaging service to local folks with poor to non-existent telephone service) and similar while also trying to get in all the announcements, classifieds and “Thank You’s” to individuals and businesses that provide monetary support for KTNA yet still fit this into your allotted time (25 to 30 minutes depending upon the newscast).  This also can be stretched by using music in specific places like between the news and classifieds/announcements but one can only watch the clock and try to estimate on the fly whether you’re going to run over or be short.  A large ‘no-no’, almost as big as the dropping of certain ‘colorful expletives’, is running long such that one must cut into a pre-recorded program; this is to be avoided at all costs.  The experienced folks just have a feel for how long everything will take and can pretty much guess how much music they may have to add or what items they may have to cut.  Newbies like yours truly have no such perception and hence we are ‘clock watchers’.  This presents its own challenges because its tough to be reading the announcements while keeping an eye on the clock and making sure a music CD is cued just in case you finish everything before time to switch to the network feed.  People in general and me in particular are not good at multitasking and more than once I’ve thought I was going to end up short only to have to abruptly finish in a most awkward fashion so as not to cut into the network feed.

Still and all I am finding I enjoy the challenges although every error I make, a lot that probably aren’t even recognized as such by the listeners, sounds loud and hideous through the headphones and I have a tough time not wincing.  I desperately need to learn that mindset that allows one to stumble over a name or a typo and just continue on as though nothing happened; right now just such a minor fumble can upset my rhythm for the next few minutes or sometimes for the remainder of the broadcast!  Because of this I’ve learned the true value in ‘pre-reading’ everything that I’ll be reading live; by doing this I generally detect any typos, names I’m not sure how to pronounce or similar such that I can get what info I need or at least make a mental note that in story ‘X’ there’s a pronoun inconsistency.

Today (Friday, December 6, 2013) is going to be a big day for me as I will be handling my good friend Holly’s noon newscast and her music show (The Patchwork Hour) which runs from 13:00 to 14:00 AKST.  Of course I’ll be back in for my newscast at 18:00 as well.  At least by the time of the evening newscast I’ll have been through the noon newscast so all I will really need to do is refresh the news tab, the announcements/classified and the weather; then I should be good to go.  I’m looking forward to doing the music show because there’s a lot more freedom to ad lib during such formats and I suspect I’m going to volunteer to fill one of the current three openings we have for a music show.  All in all I really do enjoy volunteering time to KTNA as the staff and volunteers are great folks and the station really does serve a vital purpose for this area.  It is the only reliably received radio station in the middle to upper Susitna River Valley and the only source of ‘real time’ local news, weather (the NOAA ‘All Hazards’ broadcast from the Anchorage bowl area does not reach this far north as its blocked by the Talkeetna Mountains) and announcements for the large area between Willow to the south and Cantwell to the north.  Without KTNA information would have to be passed via email, USPS or word of mouth which is much less timely and could cause issues in the event of true emergencies.  While I learned the joy of volunteering at an assisted living facility in SE Michigan its great that I can continue to do so via my efforts at KTNA.  Hope you can listen in on-line as KTNA streams their broadcasts; if interested just visit ‘ktna.org’ and select the ‘listen on-line’ option.  My weekly newscasts are every Thursday and Friday evening from 18:00 to 18:25 AKST.