Even though I have not spent an October in Alaska until this one I did a lot of research on the weather of my possible retirement locations – it ultimately came down to Homer in the southern Kenai Peninsula on Kachemak Bay or Talkeetna – and experienced fall and some spring weather in each location as well.  Indeed, one of the determining factors in my final choice of Talkeetna was its propensity for cold, snowy winters.  Therefore imagine my surprise given the weather I’ve actually experienced since arriving in the early afternoon of August 6th!  The remainder of August was warmer than normal with above normal precipitation, September was at least four degrees above normal in terms of temps and saw well over twice the normal rainfall and now October has been at least five degrees above normal temps and we’ve already seen 199% of October’s normal average rainfall of 2.90″.  During the completed 19 days of October to this point I’ve reported measurable precipitation on 16 of those days (that’s 84.2%..!!) and today being the 20th day will definitely see some rain before midnight.

In conversations with the locals I’ve been told October normally sports steadily cooling temperatures but many days with dry sunshine and some of the best weather of the year.  According to NWS climatological records the average first snowfall in Talkeetna is around October 3rd yet we have yet to see any snow and will probably not see any for at least another couple of days.  When it finally does snow it will most likely be mixed with rain and occur only during the early morning hours before turning over to just rain.  I was also told that by this time last October the lakes and rivers had frozen over and people were beginning to ice skate on them!  Only twice have I seen any ice on the local ponds and lakes and that was just the barest trace.  I have noted numerous reports of snow in the lower 48; my sister saw accumulating snow in Monument, Colorado – a northern suburb of Colorado Springs – three days ago.  But NWS is saying all of Alaska will see well above normal temps for at least the next six to ten days.

I’m not convinced of the validity of ‘global warming’ or perhaps I should clarify; I do without question believe the earth’s climate is getting warmer but I remain unconvinced it’s all humanity’s fault.  Sure, I can believe we’ve played a part but I also believe there’s much more going on in terms of geological processes and climate cycles than we understand or have even recognized.  With all this said what I’ve experienced since August certainly would seem to support the climate is warming although to make such an assumption based upon a couple of warm months is a scientific absurdity.  However, when I first visited Alaska in the early fall of ’96 I know Denali NP&P closed around the start of the second full week in September generally because it was already dropping well below freezing and staying right around that temp during the days.  Yet as the years have passed I’ve seen the Park remain open later and later; I believe it didn’t close this year until the end of September.  I also remember growing up in SE Michigan when we did see snow on the ground one out of every three or four Thanksgivings; while I haven’t checked the actual data I’m sure its been decades since there was snow on the ground by late November in that area.

Regardless, the weather I’ve experienced in Talkeetna to this point has been very unusual in terms of warmth and rainfall; data from years of observations back this up.  It is interesting to still see insects outside when the temp rises above 40 F and especially if we see just a bit of direct sunlight during those temps.  My neighbor told me that in a ‘typical’ year all the insects are history by the first part of October.  I cannot help but wonder if this run of warm and wet weather will continue into November which at this time is just eleven days out.  I do know I could sure use a break in the darn rain as I have a lot of material I need to get burned before it begins to snow and accumulate – assuming this ever happens – but right now everything is saturated.  I have a huge pile of cardboard boxes stacked by the burn barrel which are soggy and beginning to fall apart; I’ve tried building a wood fire inside the barrel and then feeding said cardboard slowly into it but this requires hours of such effort to burn just a few boxes.  Trying to hurry the process just puts out the fire in the barrel. 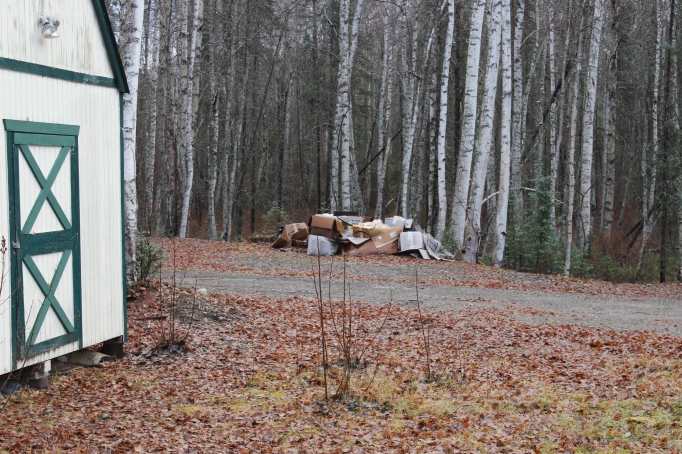 Remnants of moving boxes and packing material too saturated to burn

I’ve also grown tired of running my dehumidifier almost constantly since I first purchased it a few days after arriving.  However, failure to do so will allow the relative  humidity to slowly climb above 70% which is just too darn high!  Prior to moving up here I wouldn’t have thought a dehumidifier would become an absolute necessity but its possible that if the local weather does return to some kind of ‘normal’ then perhaps I won’t need to run it constantly.  I do know one thing for sure; Mother Nature will do as she will regardless of my wishes – or anyone else’s for that matter – so I’d best just learn to roll with the punches and try to work around the less than favorable situations…